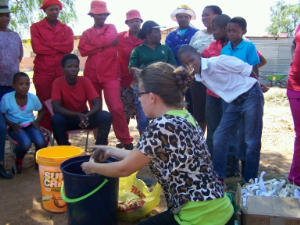 After I visited Bonolo’s Village, I headed to Kuruman and stopped by The Eye of Kuruman. I’ll post photos of that in a separate post, but it was one of those nice surprises you stumble upon in your travels. The staff members were nice, the Eye was peaceful, and I enjoyed a picnic lunch and reading for a few hours at this little oasis in the desert. Around midafternoon, another PCV met me there, as I was headed to her site to do a training. I’ll call her Tshepo, and she lives in a village about half an hour from Kuruman. It is seriously tiny (think 500 people) but has regular buses to it, a pretty good multigraded school, and some awesome organizations. 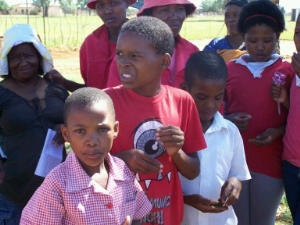 I made them eat dirt. In my defense, it’s a soil test and I did it too!

I spent three days in her village, hosting a training and enjoying her beautiful house (she is lucky and has a four room HOUSE to live in….as opposed to my room). She’s a really good cook, and has a lot of energy.

Doing the “ball” soil test. I’m focusing hard so I can catch it. Also, don’t I look so Peace Corps? 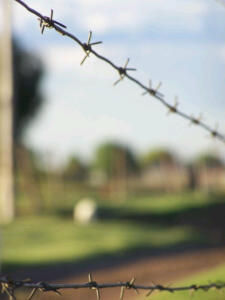 This training was my first training after my PDC, so I was super excited for it. It was also the longest one I’ve done. We met for three days and I was able to teach the basics of permaculture: principles, mulch, compost, wormeries, trench beds, companion planting, intercropping, natural pest control, and recycling. Language was an issue, as always, but I’m learning a lot of garden vocabulary in Setswana, and am pretty used to working with a translator (it’s not as simple as you might imagine). At the end, the learners and volunteers divided up into groups and sang songs about what we learned. One of them went something like this “The white lady has brought permaculture to our school!” and involved a dance and lots of thrilling-yells. It made me smile. 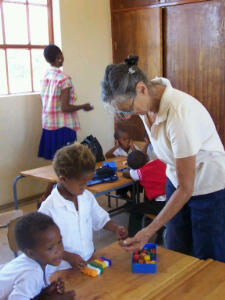 I also did evaluations for the first time, and though many of the learners struggled to write one, even in Setswana, I got some good responses. Some of them just made me smile!

And one of my favourite sayings:
Ke diboko. Ga ke noga. Ga di lome. Ga go na meino. These are worms. They are not snakes. They do not bite. They do not have teeth.

Can you guess what most people were afraid of?
-Jen 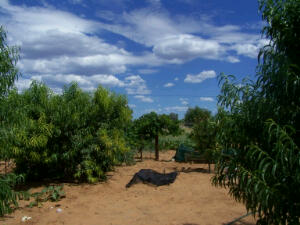 A garden. In the Kalahari Desert. Is this heaven? No! It’s the Valley of Hope!

Gotta have those certificates!

Or check out my other blog, Growing in Faith!

To save time, I will be using lots of acronyms or words that I won't always explain. Here's what they mean:

COS: Close of Service